Hill & Millard were recorded in London commercial directories from the mid-19th Century as ‘military outfitters and trunk makers,’ describing themselves in advertisements as ‘Manufacturers of Portable Military Furniture.’ The firm are regarded by many as one of the best manufacturers of campaign furniture in this period. 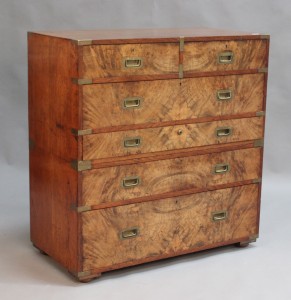 “Campaign furniture was produced at a time when military personnel were required to provide their own furniture for tours of duty,” says Toovey’s furniture expert, Will Rowsell, who continues “the furniture needed to be robust for travel, and compact to fit within small cabins, tents, or if they were lucky, a billet. It is quite unusual to find an example with the luxurious burr walnut drawer fronts, perhaps indicating this was once the property of a wealthy military gentleman of high rank – we will never know for certain, and we can only speculate as to what action this lovely piece of furniture might have seen.”

Because of its compact size and clean lines, campaign furniture fits within the modern home. This secrétaire chest carries a pre-sale estimate of £2000-3000 reflecting its quality. It will be offered for sale at 10am on Friday 25th April at Toovey’s Spring Gardens rooms.

The news seems to be increasingly focused on climate change and the World’s resources. In the West decades of cheap imports from emerging economies have given us a false sense of the price of things. With ever growing international demand for finite resources raw materials must, overtime, continue to rise inexorably. Things will become ever more expensive and once again items will have to be built to last and be repairable. Our sense of value should of course take account of pay and conditions for the workers in the factories and workshops which can sell their wares for so little.

When I started out as an Antique and Fine Art Auctioneer and Valuer some thirty years I can remember driving across a field to a cottage outside Horsham to be met by an elderly gentleman with a snow white beard. There was no electricity and the water for our tea came from a hand pump well. Victorian oil lamps filled the corners of his room and the house smelt comfortingly of wood smoke. I felt that I had stepped into a 19th century painting like the one illustrated by the 19th century Royal Scottish Academician, Thomas Faed. This small oil sketch with pencil traces depicts a comfortable interior scene with two mothers in conversation as the children shyly glance awkwardly at each other. This delightful painting was auctioned at Toovey’s for £1700.

At that time a phrase you often heard amongst the well to do middle class was “we’re too poor to buy rubbish.” There was something so practical and sensible in buying good quality items that would last. For a generation who had married and set up home before and after the wars antique furniture, both from their families and bought, provided the opportunity to have beautiful things in an age of austerity, rationing and a shortage of raw materials.

Fine examples of English furniture still command good prices like this George III mahogany serpentine front chest of drawers with its beautiful figured mahogany. The timber seems to be alive in the way that it reflects the light. It realised £3200 at Toovey’s. But a well-proportioned George III mahogany chest of drawers with a brushing slide like the one illustrated can be purchased at auction for about £400 and will give pleasure and utility to your family over generations to come, with no impact on the World’s diminishing resources.

The time has come for us to reassess brown furniture. Prices can only rise for these pieces which combine the aesthetic with quality and longevity. Perhaps once again we will be heard to say “we’re too poor to buy rubbish.” Toovey’s next sale of fine furniture will be held on Friday 25th April 2014.

This coming Sunday, 6th April 2014, the 160th annual Oxford and Cambridge University Boat Race will be held. The Boat Race was first held in 1829, making this one of the oldest surviving sporting events in the world. The second Boat Race took place in 1836 in London, where it has been held ever since.

The competition began as a challenge between two old school friends, Charles Merivale and Charles Wordsworth, the nephew of the famous poet William Wordsworth. Today it has become an important fixture in the English sporting calendar and one which underlines the international and outward-looking qualities of the English at their best. The crews fielded by Oxford and Cambridge often reflect the global standing of these universities, whose students and oarsmen come from across the world.

Over the years I have increasingly found myself in London, invited to value and sell important collections by their owners. It was during a recent day spent in Sheen, near Richmond, that I discovered this marvellous 19th century oil painting of the Boat Race by J.B. Allen. It struck me as rather wonderful that it was residing near the very shores of the Thames where Allen depicted the view, between Putney and Mortlake.

In this Victorian scene the crowds are so numerous that they have taken to boats in order to get a better view of the crews as they row by. Arms and hats are raised as the excited spectators cheer their chosen team onwards. There is a cold wind blowing, causing flags to flutter. The greys and blues in the artist’s palette remind us that Easter is approaching and spring is only just arriving. Though less finely painted, the panorama of the crowds is reminiscent of that great Victorian painter William Powell Frith, who painted ‘The Derby Day’ between 1856 and 1858. In a similar way to Powell, J.B. Allen depicts a series of very personal vignettes within the grand sweep of his Boat Race scene: boatmen steady ladies in their boats; gentlemen point towards the action and cheers go up amongst different parties of people. It is a painting which is alive and still creates excitement in us today. I am pleased to say that this oil on canvas subsequently came to Sussex to Toovey’s and was auctioned in our fine art sale on 26th March 2014 for £10,500.

Around 1938 the Sussex artist Eric Ravilious provided an alternative view of the Oxford and Cambridge Boat Race in his designs for Wedgwood. Known as the Boat Race Day pattern, the exterior of this bowl depicts three successive scenes from the race and a mermaid device. Again, the numerous crowds are depicted cheering in the foreground, their arms raised in excitement, but the stylized scene appears as a moment captured outside of time, as is often the case with Ravilious’ work. The interior of the bowl shows Piccadilly Circus at night. Today at auction, a Boat Race Day pattern bowl would realise between £800 and £1200.

This Sunday at 12.00 noon, between church and lunch, millions of us will be cheering on our team. We will be held in the moment as the drama unfolds on our televisions or before us from the banks of the Thames. We will be caught up in the atmosphere and mood of celebration of this most English of sporting events, celebrating the highest standards of amateur sportsmanship, captured with such life by J.B. Allen more than an hundred years ago.

Advice on your paintings is freely available from Toovey’s; contact us to make an appointment with our fine art specialists.