Fred Clark, as he was always known, was born to publicans in South London. Sometime later, the whole family moved to Seaford in East Sussex.

Fred’s greatest passion in life was collecting and, following the family move, he loved nothing more than field-walking in Seaford and on the Peacehaven Downs. These areas were rich in fossils and prehistoric flints. Such was his passion for collecting that he would, on occasions, ride all the way to Suffolk on his BSA Bantam motorbike, following in the footsteps of his predecessor Dr William Allen Sturge and those of his great friend, the collector Dr Hugh Fawcett, who was well-known for his lithic collections.

Once again the family moved, this time to Woking in Surrey, and in the 1960s Fred decided to open a shop in nearby Guildford selling collectables. These included fossils, minerals, prehistoric tools and coins. His shop was to become very popular with collectors and he continued to trade there until he retired in the mid-1980s.

Following his retirement, he moved to Worthing, where he stayed for many years until he sadly passed away following a short illness.

Fred Clark was meticulous with recording. Every artefact he found would be written on with a location and his monogram ‘FC’, which remains well-known by academics and collectors to this day.

Fred formed his coin collection predominantly during the 1960s and 1970s.

A large archive of material collected by Leo Genn (1905-1978), all concerning the investigation and prosecution of war criminals at the Nuremberg Trials in 1945-1946. The archive comprises Genn’s original copies of the signed witness and prisoner statements, photographic evidence and images of the defendants, case files and other evidence. The majority focuses on Belsen and Auschwitz concentration camps, including statements and photographs of the defendants Irma Grese, Hilde Lohbauer, Karl Schmitt, Walte Steuer, Franz Harich, Jonas Levi and Willy Jong and others. Also included are Leo Genn’s identity tags and an army-issue canvas bag, in which the archive was discovered.

Leo Genn studied law at Cambridge and was a qualified barrister, but he also enjoyed a successful career in film and theatre. He volunteered his legal knowledge to the British Army unit involved in the investigation and prosecution of Nazi war crimes perpetrated at the Belsen concentration camp, and subsequently became an assistant prosecutor at the Nuremberg Trials.

A remarkable collection of coins, predominately from Classical Antiquity, have been entered for auction at Toovey’s and is expected to realise tens of thousands of pounds. This single owner collection of coins was formed during the 1960s and 1970s by the late Fred Clark, a gifted and meticulous antiquarian.

Fred rode his BSA Bantham motorcycle all over Suffolk and the South East of England collecting not only coins but fossils and prehistoric flints too.

When his family moved to Woking in Surrey in the 1960s Fred opened a shop in Guildford which became a favourite haunt for collectors.

The study of the ancient civilisations of Greece and Rome have had a profound influence on Western Civilisation and thinking over millennia. As we look through this remarkable collection it becomes apparent that nearly all the Roman Emperors are represented in the coins. Fred Clark was a gifted classicist.

Toovey’s specialist, Mark Stonard, draws my attention to the Roman Empire Hadrian (117-138AD) sestertius. He explains that on the reverse Ceres is depicted standing to the left, holding corn ears and a long torch. Mark says “Hadrian is such a well-known character to us. The natural patination of this bronze sestertius coin and its condition is very good.” There is an accompanying letter from the British Museum, dated 17th July 1970, remarking that this coin is ‘even better than their own example’. The finely penned label written by Fred Clark describes the coin and its history. Mark comments “Fred was meticulous with his recording.”

The coin reminds me that the Emperor Hadrian was a brilliant administrator and travelled the Empire visiting the Provinces and ensuring discipline in the Roman armies which he held in such high regard. Hadrian was also renowned for his love of architecture and building. The Pantheon which he rebuilt in Rome still stands.

Hadrian left his mark in Britain too. The Vallum Hadrian, known today as Hadrian’s Wall, was built around 122AD. It stretched from coast to coast and its ruins can still be seen today.

The British Empire looked to the Classical Antiquity for inspiration in its arts, architecture and objects.

This influence is apparent in the George IV crown dated 1821 which depicts the King as an Emperor from antiquity which is in fine condition.

With estimates ranging from the low hundreds into the thousands the collection is expected to realise tens of thousands of pounds. The Fred Clark coin collection will be auctioned at Toovey’s on Wednesday 1st November 2017 in the afternoon.

Coins connect us with the procession of human history in a remarkable way and delight in the quality of their aesthetic and manufacture. No wonder that they are a boom market.

You never know what will be brought to the salerooms for valuation. Recently an old trunk was brought to Toovey’s for valuation and sale. The owner’s hopes were confirmed, when it was identified as a rare early Louis Vuitton ‘malle cabine’ trunk dating from around 1895. It sold last week for £26,000.

The famous Louis Vuitton ‘LV’ monogram decoration was not introduced until 1896 as part of George Vuitton’s worldwide expansion of the firm. This early example was beautifully crafted but quite plain in comparison to the George Vuitton’s trunks. All Louis Vuitton trunks are numbered and it was the original numbered paper label in the interior which confirmed its authenticity and value.

The early story of Louis Vuitton is a romantic one caught up with the industrial and political revolutions of 19th century France. Its founder, Louis Vuitton, spent his early childhood in Anchay in the Jura region on the eastern borders of France. The 1830s witnessed a significant migration in France from countryside to city. In 1835 the thirteen year old Louis Vuitton left home. It took him two years to walk the 292 miles to Paris as he worked to feed himself along the way. He arrived in the city in 1837. These qualities of determination and hard work would inform his life and success.

At the age of sixteen Louis Vuitton was taken on as an apprentice in the workshop of the successful packer and box maker Monsieur Marechal where he quickly gained a reputation for his abilities in this fashionable field of enterprise.

In 1854 he married Clemence-Emile Parriaux and left Marechal to found Louis Vuitton. To begin with he specialized in packing fashions and fragile objects. It was not until 1858 that he introduced his revolutionary rectangular, stackable trunks which were an immediate success and the business expanded. His reputation for boxes of the finest quality was assured.

Napolean III and the French Empire was re-established in 1852 and Louis Vuitton was hired as the personal box maker to the Empress of France, Eugine de Montijo. This patronage and the period of urbanization and industrialization that ensured brought Europe’s elite to his firm.

The quality of Louis Vuitton’s work, his determination and hard work continued until his death in 1892. His son George Vuitton would build on his father’s foundations and establish Louis Vuitton as a worldwide company. 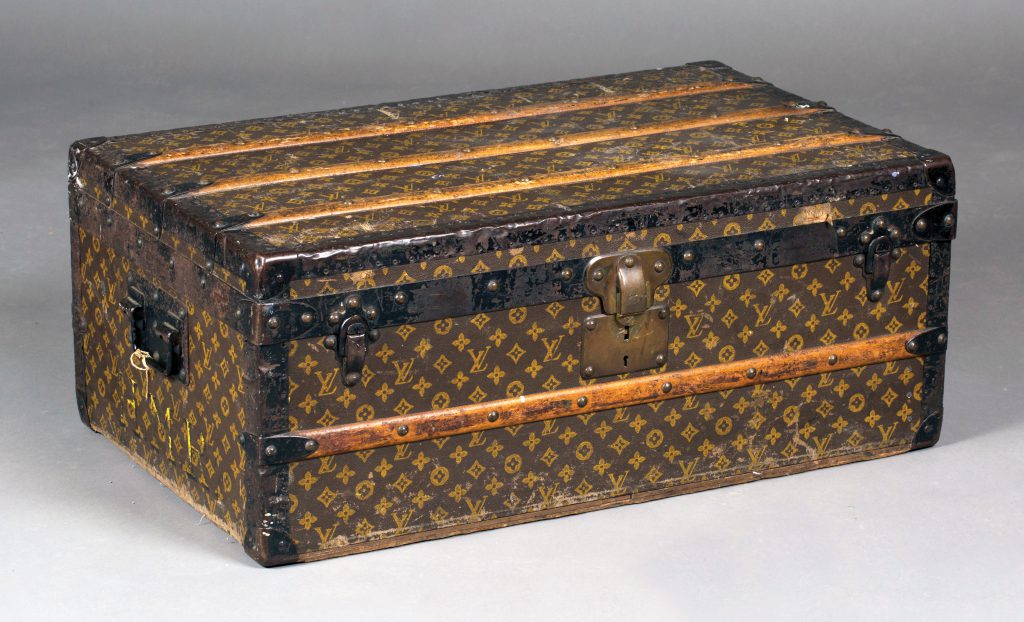 It was George who launched the famous LV monogram on a brown ground that you can see on the larger Louis Vuitton travelling trunk illustrated. It had a paper label to its interior inscribed ‘1 Rue Scribe, Paris, Louis Vuitton, 149 New Bond St. London’ and numbered ‘108407’. The other Louis Vuitton trunk illustrated is more reminiscent in its size and shape of the earlier plain example. It too had its original paper label. Both trunks dated from the late 19th/early 20th century and sold recently at Toovey’s for £5500 and £2200 respectively.

The story of the founder, Louis Vuitton, together with the beautiful craftsmanship which he established ensure that the earliest and rarest examples of the company’s work attract international attention at auction and underpin the continued reputation of this luxury brand today.

The Worcester porcelain factory is amongst the finest and longest lived of the English porcelain manufacturers. The pieces made in the late 18th and early 19th centuries are outstanding.

The first period of Worcester porcelain manufacture is known as the ‘Dr Wall Period’ (1751-1776) after one of its founding shareholders John Wall. In 1783 the firm’s London agent, Thomas Flight, bought the Worcester factory for his sons Joseph and John. This new period was marked by a new paste which produced a more pearly white body. The style changed too reflecting the fashion for the Neo-Classical in both decoration and form. John Flight travelled in France to study the latest French porcelain designs. In 1788 King George III and Queen Charlotte toured Flight’s Worcester Porcelain factory and ordered a breakfast service.

After his father’s death in 1792 Joseph Flight formed a partnership with Martin Barr. The firm traded as Flight & Barr between 1792 and 1804, then as the partnership between the families changed it became Barr, Flight & Barr until 1813 when Martin Barr died and the company became Flight, Barr and Barr.

After 1780 the gilding was applied with mercury and burnished to a bright finish. This can be seen in the examples illustrated from Toovey’s auctions.

I adore the richness of the japanesery decoration on the Barr, Flight & Barr Worcester porcelain chocolate cup, cover and stand which dates from between 1807 and 1813. The tapering cup, flanked by its angular gilt handles, is painted with a pagoda, exotic birds and flowers in a fenced garden scene. It sold for £500.

It was during the later Flight, Barr and Barr period (1813-1840) that some of the finest quality wares were produced.

The wares from this period were often decorated with finely enamelled panels on coloured grounds. These grounds were applied by the oil and dusting process which gave a smoother, deeper finish than those achieved with a brush.

Unusually the painters at Worcester were paid by the hour, not by the number of pieces decorated. The factory employed some of the leading ceramic painters of the period including Charles Stinton. Charles was celebrated for his depictions of exotic birds and flowers.

His fine enamel work can be seen in the panels of birds and flowers on the Flight, Barr and Barr dessert dishes. Each is framed with gilded decoration in a stylized seaweed design against a white ground. The collection made £380.

It is the finest pieces which attract strong competition from collectors, and condition is important. However, single cups and saucers, coffee cans, dishes and bowls can be found at auction very reasonably and provide a great way to begin to collect George III and Regency English porcelain from the late 18th and early 19th centuries with its rich variety of designs and beautiful decoration.