The central threads of William Blake’s art and writing are beautifully woven together with the formative time that this revolutionary artist spent in Sussex.

William Blake spent most of his life in London. However, for a number of years he lived in Sussex. In 1800 he moved to a cottage in Felpham, West Sussex, to illustrate work by the poet William Hayley. During this period William Blake wrote the poem titled ‘And Did Those Feet in Ancient Time’. It formed part of the preface to his epic work ‘Milton a Poet’ which he worked on until 1808. The poem builds on that wonderful passage from the Bible in chapter 21 of the Book of Revelation where Creation is perfected and renewed as heaven and earth are united.

Blake wrote to Thomas Butts shortly after his arrival in Sussex: ‘the sweet air and the voices of the winds, trees and birds and the odours of our happy ground makes [Felpham] a dwelling for immortals.’ Blake’s language articulates an earthly paradise contrasting with his lifelong experience of the environs of London.

‘Milton a Poet’ has an image titled ‘Blake’s Cottage at Felpham’. The lithographed facsimile illustration you see here is from The Works of William Blake, Poetic, Symbolic, and Critical which was published by Bernard Quaritch in London in 1893. It depicts Blake visited by the figure of ‘Inspiration’ in the garden of his cottage. The narrative forms part of a very personal mythology of his own creation. Felpham continued to inform the pastoral qualities of his Arcadian figures depicted under a ‘tranquil moon’ and ‘setting sun’ in his later work. 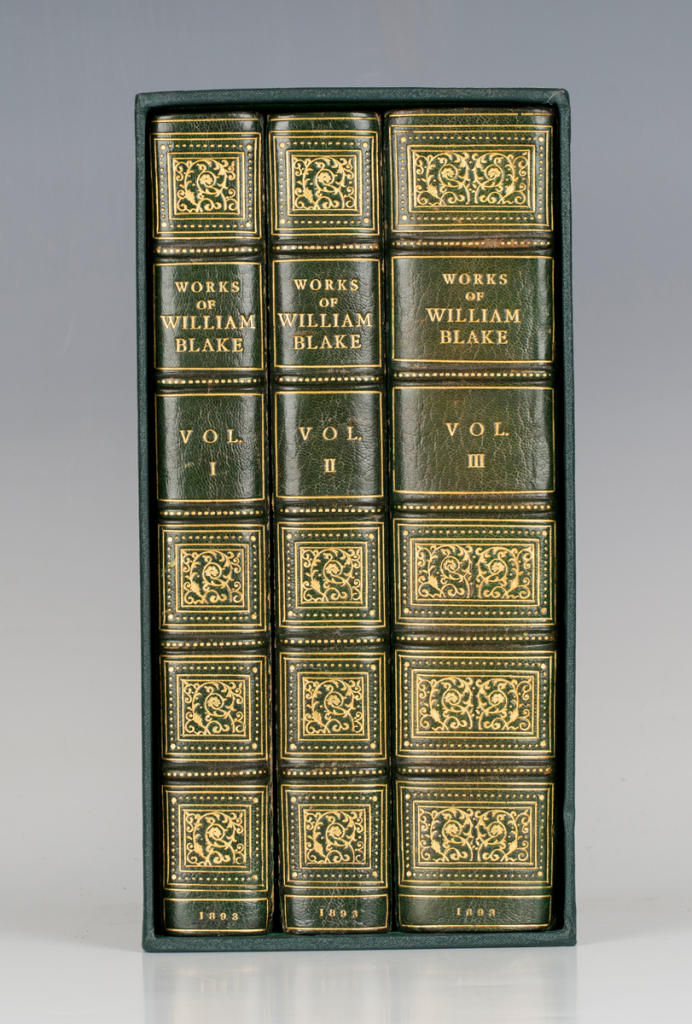 The Works of William Blake, Poetic, Symbolic, and Critical provided an important interpretation of Blake’s esoteric system and was edited by Edwin John Ellis and William Butler Yeats. This example realised £950 at Toovey’s.

The importance of Blake’s work was not wholly understood during his own life-time though it inspired a new, younger generation of visionary artists which included Samuel Palmer, George Richmond and Edward Calvert, who called themselves ‘the Ancients’.

A little over 100 years later in response to the huge casualties of the Battle of the Somme and declining morale Robert Bridges, the Poet Laureate, edited a patriotic anthology of poems titled ‘The Spirit of Man’. Amongst these was the then little known poem by William Blake titled ‘And Did Those Feet in Ancient Time’ better known to us today as ‘Jerusalem’.

In 1916 Bridges invited Hubert Parry, who was living at Rustington, to set William Blake’s poem ‘Jerusalem’ to music and the hymn became a national anthem. Jerusalem’s success inculcated redemption, renewal and hope into our national psyche.

So Jerusalem is a hymn inspired and born out of the beautiful county of Sussex and perhaps the new Jerusalem, ‘England’s mountains green’ and ‘pleasant pastures seen’ are to be found in the folds of the ancient Sussex Downs and the Sussex Weald.

The Yongzheng Emperor (1678-1735) reigned over China between 1723 and 1735. He restored a functional imperial court and good government based around Confucian principles rooting out corruption.

He encouraged the development of the arts in China. He was particularly interested in the imperial porcelain factory at Jingdezhen where he appointed Tang Ying (1682–1756) as director in 1728.

The Yongzheng period would see the production of some of the world’s most delicate porcelain and enamelled painting with the Emperor choosing artists and providing commentary on their work.

During this period exports of famille verte porcelain were overtaken by the famille rose palette.

Yongzheng porcelain is of the very highest quality and its brilliance remained unsurpassed in later periods. These pieces are often superbly decorated with harmonious scenes of birds in branches, long-tailed pheasants, flowering plants and fruiting branches like the £4,500 famille rose charger.

Family scenes with children and adults are also typical of the Yongzheng period. The restored vase and cover with its beautifully conceived baluster body is decorated with a scene of a boy lighting a firecracker as a group of twelve other boys and four maidens watch on. One of the boys puts his hands to his ears. It sold at Toovey’s for £10,000. Like a scroll painting the scene reveals itself as you turn the vase.

The clear white porcelain made an ideal surface for the fine painting you see on these two examples. The decoration is more restrained and less crowded than later pieces which sought to answer Western tastes for richer designs.

Whilst famille verte pieces continued to be decorated where they were manufactured famille rose pieces were often decorated and re-fired in muffle kilns at places like Canton where Western companies established trading posts.

This technical excellence and style is explained by the production processes refined by Tang Ying at Jingdezhen. Tang Ting was the foremost ceramic expert in China. He was summoned to Beijing in 1743 to illustrate and catalogue the imperial collection and described the process of porcelain manufacture in twenty steps. This led to an elaborate division of labour at the imperial kilns so that no one person was responsible for the production of a single piece at Jingdezhen.

The Chinese market continues to rise as European and Chinese collectors remain as passionate in their collecting as their imperial forebears and the market shows no signs of abating. If you would like advice on your Chinese objects Toovey’s Chinese specialist, Tom Rowsell, can be contacted on 01903 891955 or by emailing auctions@tooveys.com.

This week I am with Rowan Allan who for twenty-three years has been the Honorary Secretary of The West Grinstead & District Ploughing & Agricultural Society. Rowan has been joined in the role by Felicity Elliott. The society is returning to its roots in the Parish of West Grinstead as it celebrates its 150th Anniversary, where the 2021 Annual Ploughing Match and Agricultural Show is to be held at Priors Byne Farm on Saturday 18th September.

I am always excited to attend the ploughing match.

Rowan Allan says “It’s great to be returning to Priors Byne Farm. John and Alison Ford and their team will give everyone a warm welcome – it’s one of our most popular venues and the agricultural community is looking forward to being able to come together once again.”

I comment on the extraordinary stewardship I have seen amongst the district’s farming community. Rowan comments “Balancing one’s heritage with the needs of the natural environment and food production is perfectly possible.”

The West Grinstead and District Ploughing Match and Agricultural Society has been holding shows for over 140 years. It seeks to re-connect town and country and educate the public.

Rowan says “The ploughing match provides a shop window for people to engage with what farming and the countryside are really about.”

I remark that it’s a great family day out with the ploughing competition, cattle and sheep shows, licenced bar, fun fair, trade stands and local produce, terrier racing, open clay shooting competitions, tug-of-war, gun dog scurry, tractor and threshing machinery and even a ferret race, there is so much to enjoy – Rowan agrees.

Since 1871 The West Grinstead and District Plough Match and Agricultural Society has been promoting best practice in the local agricultural community through its prizes and awards. Today that also includes a bursary programme which provides financial support to enable and encourage young people to take up careers in the agricultural industry.

Our landscape is one of the most important building blocks of our nation’s heritage and identity and it is wholly dependent on the life given to it by our farmers who richly deserve our thanks.

I will be supporting Rowan and the team at the 2021 West Grinstead and District Plough Match and Agricultural Show at Priors Byne Farm, Bines Road, Partridge Green, RH13 8EQ on Saturday 18th September 2021. Entrance is just £8 per person with children under 14 free. It’s going to be a fantastic family day – I hope to see you there!

Toovey’s are delighted to announce the Sale of The Tim Harding Collection of Motoring Photographs. It was amassed over a lifetime of collecting by Tim Harding, a motoring historian who had an encyclopaedic knowledge of early vehicle marques.

Tim Harding died in 2018 and part of the collection is now to be dispersed through an auction sale at Toovey’s in Washington. West Sussex, on 27th October 2021. Such is the size of the collection that this will be the first of two sales.

The collection comprises photographs in all formats from full plate to ‘box brownie’.  The images, well over 20,000 in number, cover the period from the very earliest days of motoring to the early post war era. Most are loose but some are framed and mounted, and there are also ‘family albums’ compiled in period.

In addition there are a number of items of automobilia such as manufacturers’ catalogues from the 20s and 30s, and dealers’ brochures.

Bidding is available at our rooms and live via the third party website the-saleroom.com, commission bidding is also available.

The online catalogue will be available on our website from the 16th October.

West Sussex is blessed to have two of the most important Roman Villas in the country and this week I am travelling from Bignor to the Villa at Fishbourne.
The Villa is curated and maintained by The Sussex Archaeological Society. Founded in 1846 it is the oldest society of its type in the country.

The Society seeks to research, curate and promote Sussex history and heritage. It opens its historic houses, buildings and gardens with their accredited museums to the public. Its libraries and archive collections provide important tools for historical research.

Fishbourne is often referred to as a palace and is the largest Roman residential building in the country. It dates from around 75 AD, just some thirty years after the Romans came to Britain, and was remodelled and extended during the 2nd and 3rd centuries AD.

A Roman pavement was discovered at Fishbourne in 1805 during the building of a house but it was not until 1960 that Aubrey Barrett, an engineer working for the Portsmouth Water Company, discovered the foundations of a stone building located north of the main road while digging a trench for a water main.

The rediscovery of this ancient structure caught the attention of the Sussex Archaeological Society and the first series of excavations were begun in 1961 directed by the archaeologist Barry Cunliffe and his team of volunteers.

The site was saved from development by the Sussex archaeologist, Ivan Margary, who purchased the land before entrusting it to the Sussex Archaeological Society with a substantial sum to pay for the construction of the impressive cover building you see today.

In the second century AD the palace was further redesigned. Amongst the changes the hypocaust (underfloor heating) was installed in to two small rooms, fed by warm air from stokeries.

In the principle room at the heart of the palace a new mosaic was laid. At its centre is a lively polychrome depiction of a winged Cupid sitting astride a dolphin. Cupid holds the reins in one hand and a trident in the other. The muscles in his torso, legs and arms are particularly well drawn. This subtlety is lacking in the black outline which unites this central motif with the surrounding semi-circular vignettes portraying marvellous sea-panthers and seahorses, each individually depicted. Guilloche bands unite the composition which is also decorated with polychrome fan motifs and contrasting black urns.

Each time I return to Fishbourne its scale and the quality of its mosaic floors excites me. And as you walk in the gardens you have a sense of your place in the procession of history, for a moment united with the Romans.
To find out more about the Sussex Archaeological Society, how to join, and to book your tickets for the Fishbourne Roman Palace visit www.sussexpast.co.uk.