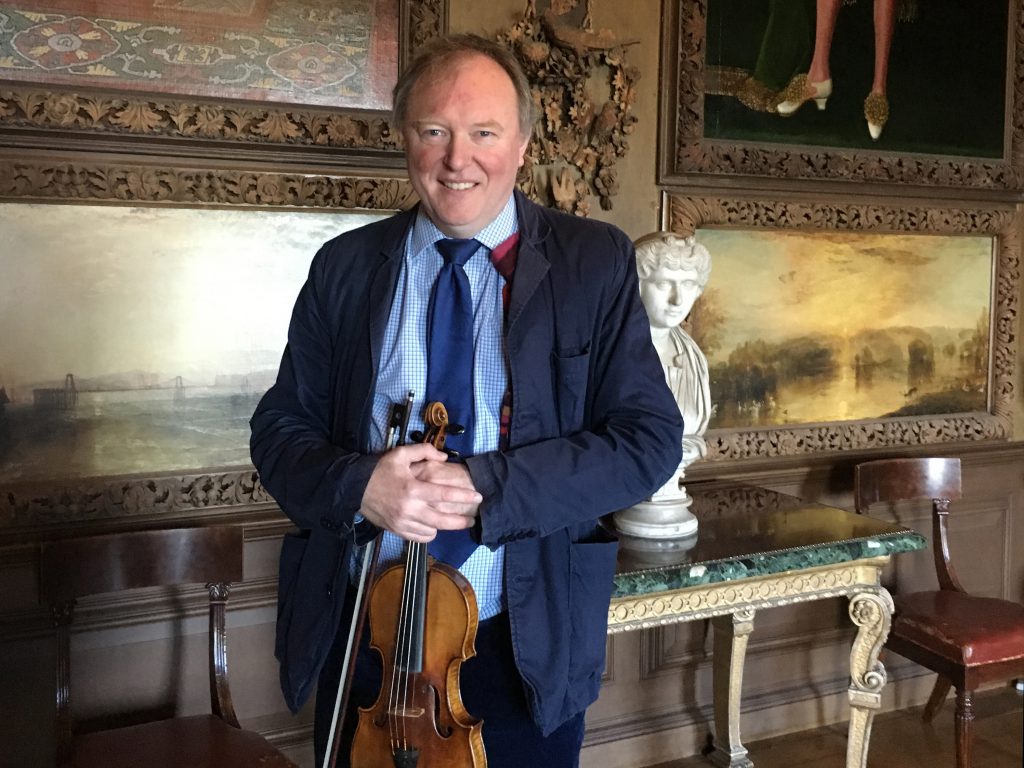 This week I am in the company of the musician and Artistic Director of the Shipley Arts Festival, Andrew Bernardi, as he prepares to launch the festival’s 2019 program of concerts across the Horsham district and beyond. Andrew is one of a number of creatives at the heart of our county’s rich arts offering.

I have long been a passionate advocate and supporter of building communities through arts and heritage in West Sussex, values which I share with Andrew Bernardi.

I ask Andrew what inspired him to become a musician. He replies “I come from a musical family, my Mother was playing piano at a Mozart concert where my parents met. They had no intention of making me a professional musician, to the contrary actually. But I realised when I was about six that I had to be a musician, that it was my vocation. My Godmother gave me my first full-sized violin and I’ve still got it. It looked big on me but I’ve only ever played full-sized violins.”

Andrew would win a place at the Skinner’s School. He continues “Everyone encouraged me in my music but it was suggested that there were safer careers.”

Andrew led the Kent Youth Orchestra. He describes how winning the Lawrence Atwell scholarship for violinists to go to the United States and Brazil with the Youth Orchestra was life changing. He says “I studied alongside a golden generation of musicians, we have all gone on to leading roles in the music world. In Brazil we stayed with top people but I became aware that the waiters came out of the Favelas and that they could have been us if we’d grown up there. It changed us and I realised that I wanted to do something for society through my music.”

Having read music at Leeds he taught at Worth Abbey where he formed their Community Orchestra and his Chamber Ensemble. The qualities of Benedictine Christian spirituality still resonate with him.

It was at Trinity College London, whilst working on his post-graduate scholarship, that Andrew’s entrepreneurial qualities were first recognised, “They told me I would be a successful violinist but as important was my ability to bring things together and make them work.” This insight has been borne out by Andrew Bernardi’s career as a violinist and by starting the Shipley Arts Festival which is now acknowledged as being one of the UK’s most highly regarded Classical Music Festivals.

Andrew’s support of young, talented musicians through his String Academy gives voice to his belief in community and creating opportunity for others.

The String Academy has strong links to the Yehudi Menuhin School thanks to Andrew’s work. It is clear that Yehudi Menuhin influenced him, “He conducted me and I led for him on several occasions. I admired his sense of humanity, his facilitation of communities through outstanding music making, and creating pathways and opportunities for young musicians – things that I aspire to.”

Andrew’s life as a violinist has taken him all over the world but it is his family and being rooted in the heart of Sussex with its gentle hills, countryside, towns and communities which feed and inspire him.

He walks in the footsteps of some illustrious musicians and composers here in Sussex including John Ireland, Ralph Vaughan Williams and Sir Edward Elgar. His work reflects a sense of calling and vocation to continue this musical tradition in our county. Through the festival and its patrons Andrew Bernardi, continues to commission new and exciting work from some of our nation’s leading contemporary composers including Roderick Williams., OBE, and Malcom Singer.

I ask him what his violin means to him. He reflects “With the Stradivarius violin I finally hear the sounds I imagined. It’s a very personal relationship a musician and their instrument.”

Relationships are important to the success of the Shipley Arts Festival and the array of international musicians who return year after year are responding to the aspirations, loyalty and vision of its Artistic Director, Andrew Bernardi.

The 2019 Shipley Arts Festival season will be exceptional. To find out more go to www.shipleyartsfestival.co.uk.