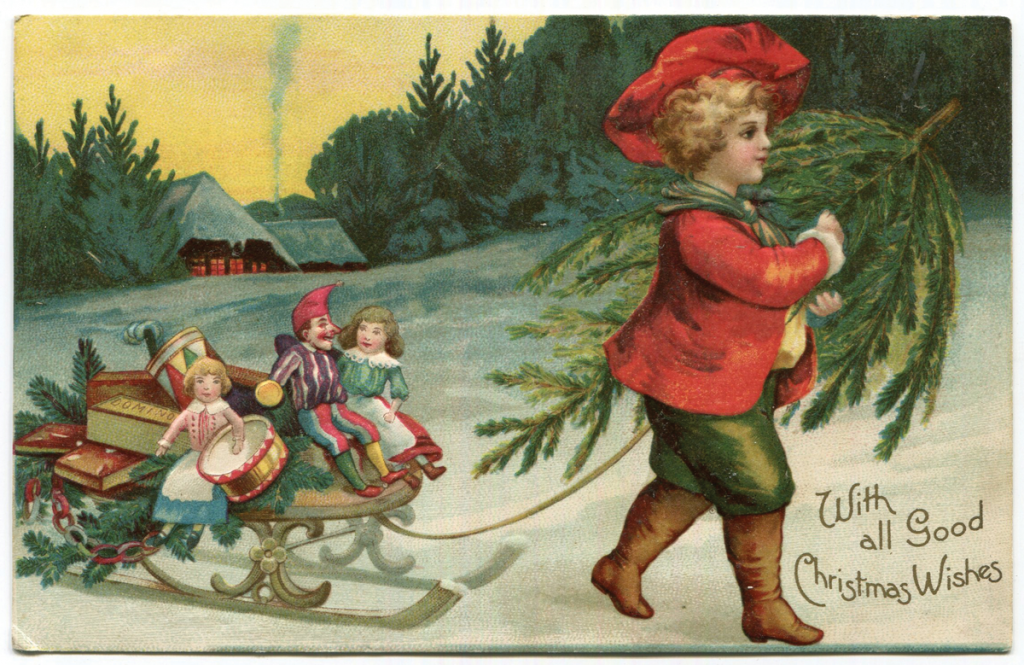 A chromolithographic Christmas Greetings Card, circa 1901, depicting the joys of a Christmas treeOne of the greatest joys of Christmas is being gathered with my family around our Christmas tree. She is already bedecked with baubles representing love and life. Hundreds of lights twinkle like stars in a night sky amongst what can only be described as a tinsel rush. Beneath the angel an array of Alessi baubles represent the Holy Family, Mary, Joseph and the baby Jesus, accompanied by a donkey and an ox.

The fir tree, evergreen and verdant in the depth of winter has been used to decorate homes over millennia. In Christian times it came to symbolize everlasting life with God. The Christmas tree has also become a symbol for the bonds of friendship. Since 1947, in a special ceremony, Norway has donated a Christmas tree to say thank you for the help that our nation gave them during World War II.

By the 1860s most well to do homes would have had a decorated Christmas tree. Queen Victoria and her husband Prince Albert played a key role in popularising this tradition in Britain. In 1848 a drawing of the ‘Queen’s Christmas tree at Windsor Castle’ was published in The Illustrated London News with the Queen and her family gathered around it. The image was replicated in numerous publications. But it is thought that the Christmas tree, a German custom, was actually introduced by George IV’s wife Queen Charlotte, herself of German birth.

I was pleased to hear Boris Johnson and Chris Whitty’s reassurance that despite Covid-19 it is safe for Father Christmas to deliver presents with his reindeer this year. Though the best present will be the company of loved ones after so much separation, and the hope of the vaccines now being deployed.

Father Christmas and the joy of a Christmas tree are vividly portrayed in the Anglo-German chromolithograph greetings cards from Toovey’s paper collectable’s sale. Father Christmas is depicted in his famous red coat with white fur cuffs and collar carrying a sack full of presents. The boy pulls a sleigh laden with presents and carries a fine tree through the snow. Both cards date from the early 20th century.

The original Father Christmas was Saint Nicholas, the Bishop of Myra in the 4th century. He was famous for his gifts to the poor as an expression of Christian love. During the Middle Ages children were given gifts in his honour on the 6th December.

Our gifts, too, are expressions of love for one another, for those in need, and our local charities which have had such a difficult time this year.

This has been a year of challenge and blessing, joys and sorrows, a time for all of us to reflect on what is most important to us – family, friendship, community and the common good. I hope this Christmas will bring you hope and blessing.