This weekend marks the 350th Anniversary of the Great Fire of London in 1666 and I am visiting Christopher Wren’s remarkable Monument to this event in the City of London.

The blaze raged between the 2nd and 5th of September 1666. Samuel Pepys viewed the unfolding destruction from the Tower of London and attended on Charles II at Whitehall to report on what he had seen. The King went by royal barge down the Thames to observe the advancing fire for himself.

Measuring 202 feet, the height of Wren’s Monument matches its distance from where the fire broke out at Thomas Farriner’s bakery in Pudding Lane. The fire left 70,000 of the city’s 80,000 population homeless and destroyed Inigo Jones’ St Paul’s Cathedral, countless churches and medieval buildings.

With great resilience the city rebuilt herself. Christopher Wren’s Monument to the fire was started in 1671 and took six years to complete. At its top is a gilded sculpture of a vase filled with flames by Caius Gabriel Cibber.

Inside the column the spiral staircase, with its 311 steps, is narrow and perfect in its symmetry. As you look up you cannot see its end. Breathless and with heart pounding you emerge onto the circular balcony which affords a 360 ̊ panoramic view of the City of London.

The City of London always seems to be constantly renewing herself. After the Great Fire of London Christopher Wren’s St Paul’s Cathedral and most of the city would have been enfolded by wooden scaffolding as it rose from the ashes. Today as you walk around the Monument balcony your eye is met not by wooden scaffolding but by enormous, towering cranes and steel girders. In the distance the dome of St Paul’s Cathedral rises above the endless construction of new buildings. On the other side the iconic, contemporary London skyline is defined by Foster and Partners’ ‘Gherkin’, Rafael Vinolyis’ ‘Walkie-talkie’ skyscraper, and Roger Stirk Harbour and Partners’ ‘Cheese-grater’ tower.

The confidence, wealth and inventiveness expressed in these buildings reflect the qualities which have always allowed the City of London to re-invent herself and flourish over the centuries. There is every sign that it will continue to do so once the UK government triggers Article 50 of the Lisbon Treaty and our nation embraces the new international opportunities of the post-Brexit era. But the UK government will need to exercise its restored sovereignty to encourage inward international investment, not just from Europe but from across the World, through regulation and globally competitive taxation. 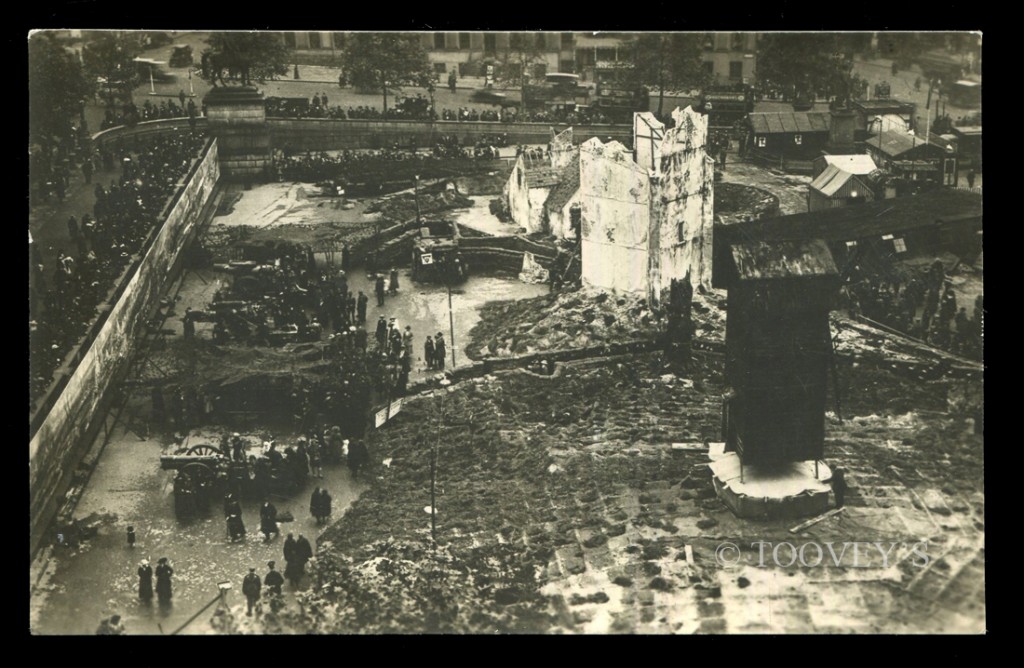 It’s not always the most expensive lots that capture the attention of our valuation team here at Toovey’s. Such was the case when specialist Nicholas Toovey discovered a fascinating view in amongst a group of London postcards.

“At first I thought it had been put in the wrong collection” said Nicholas, who continued “the uncaptioned view would look more at home with similar unidentified views of Continental Europe, perhaps Belgium or France, that was until I turned it over!” Fortunately at some time in its history a helpful owner had identified the scene in pencil on the reverse – surprisingly this postcard actually depicts Trafalgar Square in London!

A curious scene unfamiliar to most, the ruined church tower covers the statue of General Gordon and the fountain has become part of a destroyed farm house, there is even a windmill. On closer inspection the people milling around are not soldiers but people walking around soaking in the atmosphere of this highly imaginative fund raising event. As they walked around the artificial trenches, visitors were invited to place money inside howitzers and a military truck, or purchase certificates from the modified breech of a captured German gun, thus giving the campaign the name ‘Feed the Guns Week’. Held in October 1918, this transformation in London was the main focus of a nationwide campaign to sell war bonds during the First World War. These efforts raised over £31 million nationwide with captured guns making appearances all round the country.

The postcard, Lot 3128, will be offered individually on the 11th August 2015 with an estimate of £25-35 in Toovey’s Auction of Paper Collectables. Despite its modest estimate, this postcard provides a fascinating glimpse into the past and is sure to delight a collector in the near future.