An important group of seven carvings from the studio of the famous Ditchling-based artist Eric Gill A.R.A. (1882-1940) are to be auctioned at Toovey’s on Friday 13th September as part of their specialist sale of Arts & Crafts Furniture and Works of Art, commencing at 2.30pm.

I first came across this extraordinary collection of carvings from the workshop of the famous Ditchling-based artist Eric Gill at Woodbarton back in 2016. The house, built in 1920 in the heart of Ditchling Common, East Sussex, was designed by Gill for his associate, the poet and artist Desmond Chute (1895-1962). Chute only lived at Woodbarton for a few years before leaving for Rapallo in Italy, where he would be ordained as a Roman Catholic priest in 1927. The house, though, continued to provide a home to artists associated with the Ditchling arts and crafts community of the Guild of St. Joseph and St. Dominic until very recently. It seems likely that the carvings at Woodbarton were not drawn from the Ditchling workshop’s commercial output.

Eric Gill was born in Steyning, West Sussex. In his formative years, he lived in both Brighton and Chichester. In 1900, he moved to London to train as an architect with the firm W.D. Caröe. He became ever more disaffected with this path, however, and took evening classes in stonemasonry at the Westminster Technical Institute and calligraphy at the Central School of Arts and Crafts. By 1903, Eric Gill had given up his architectural training to become a calligrapher, letter-cutter and monumental mason.

In 1907, Gill found himself drawn back to Ditchling. After the First World War, he founded the Roman Catholic Guild of St. Joseph and St. Dominic with Desmond Chute and the printer, writer and poet Hilary Pepler (1878-1951). This group of artists lived in community with their wives, children, associates and apprentices, upholding the principles of the medieval artisan artist.

Gill’s assistants at the Ditchling workshop included Joseph Cribb, John Skelton, Desmond Chute and a number of other apprentices. In ‘Eric Gill, The Inscriptions’ David Peace includes a preface by Eric’s brother, Evan Gill, written in 1964. Evan explains that it is not possible, or desirable, to attempt a segregation of work by Eric Gill and his assistants. In support of this Evan quotes Desmond Chute: ‘Everything made there was wholly inspired and entirely due to him [Eric Gill]. This does not necessarily mean that all works came wholly from his hand … he made ample use of the collaboration of fellow stone cutters, esteeming this a mutual benefit. Nor did he hesitate to set his name to work thus produced – metaphorically in most cases, for he did not hold with signed work.’ Many of the works ascribed to Eric Gill, like the pieces here, will have been wholly, or in part, workshop pieces. Thanks to their workshop, this Sussex village became a centre for the Arts and Crafts movement.

Eric Gill brought his artistic and architectural skills to bear when he designed Woodbarton. The carved and painted stone stoup was set into the hallway’s wall. It would have contained holy water for members of the Guild and visitors to bless themselves. It will be offered with a pre-sale estimate of £6,000-8,000 (plus BP*).

Amongst the finest of the carvings in this collection is the stone panel carved with meditative inscriptions, which was set into a bedroom wall in the house. This beautifully conceived devotional panel, carved in Hopton Wood limestone, is incised in Latin and English ‘Considerate lilia agri – Consider the lilies of the field’, which relates to a passage in St. Matthew’s Gospel. 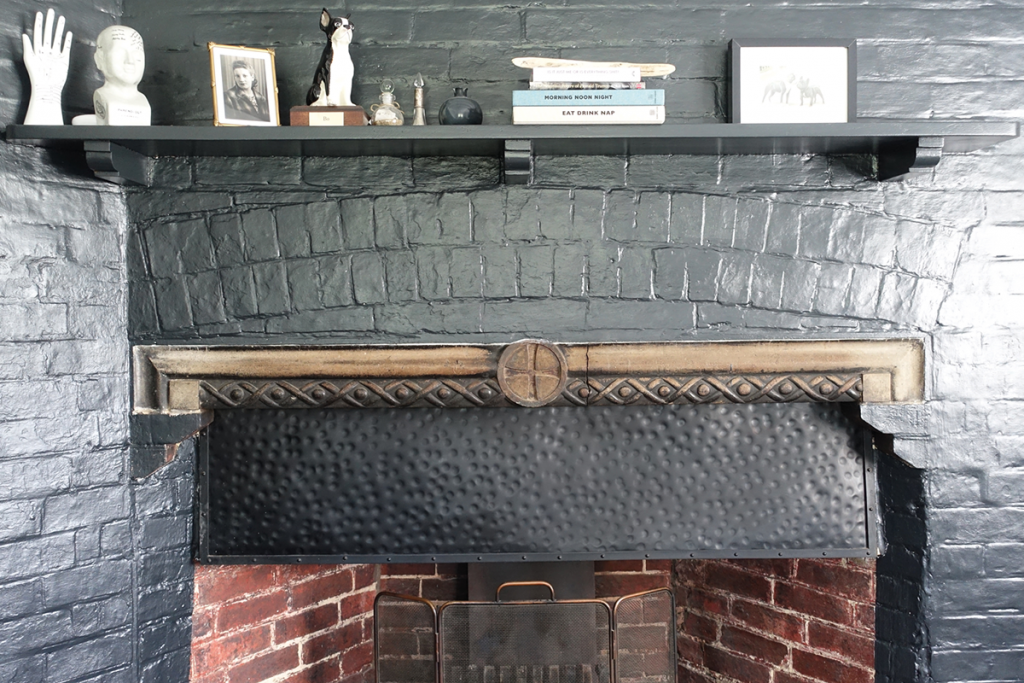 In the sitting room, the fireplace was framed by a stone carving with a central cross. The stone was originally carved for the Roman Catholic Westminster Cathedral, as a frieze for one of Gill’s Stations of the Cross. It was broken in transit, so Gill used it as part of the chimneypiece at Woodbarton. It is estimated at £6,000-£10,000 (plus BP*).

Despite the controversy surrounding Gill’s personal life, these exceptional carvings, now removed from Woodbarton, form part of an important story in the history of both the Arts and Crafts movement and Modern British art in Sussex.

I would like to thank Jenny KilBride Roberts MBE DL and others for their generous input in cataloguing the carvings.