The Brunel Hawes Archive was successfully sold by Toovey’s in November 2010. The sale made national newspapers including the Daily Mail and Daily Telegraph, and was even a topic of discussion by the National Trust in a fascinating blog post. Since the single owner auction it has been well reported that Toovey’s have established themselves as the leading auctioneers in the successful marketing and sale of items relating to the Brunel family. As the main port of call for selling items relating to Sir Marc Isambard Brunel and his son, Isambard Kingdom Brunel, it is unsurprising that an array of related items have gone under the gavel at our Spring Gardens auction house.  Items offered for sale since the Brunel Hawes Archive include ‘The Great Eastern ABC’ (featured in a previous blog post), that sold for £9000. In the same auction a slightly tatty copy of  the scarce publication ‘A Complete History of the Great Eastern‘ sold for £800.  This fascinating pamphlet published by the Liverpool department Store, Lewis’s, advertised the ship’s final use as a floating music hall. A mug and nursery plate commemorating the Thames Tunnel sold for £580, showing the demand is not just for I.K., but for his father, Sir Marc, too.  Among the slightly more unusual items offered was a silver trunk that once belonged to the famous engineer Isambard Kingdom Brunel which also beared the marks of his granddaughter’s husband Saxton William Armstrong Noble, who coincidently, was also an engineer. The oak and metal bound trunk sold for £1750 in March this year.

In April, a fascinating and possibly unique group of seven magic lantern slides were sold for £5800. Each documented the last few days of the Great Eastern and included views on deck with items grouped as lots prior to the breaking up of the ship in 1889. Two months later a mid-19th Century watercolour was consigned, titled ‘History of Steam Navigation‘, this monochrome watercolour by George Henry Andrews was probably a preliminary drawing for the ‘Illustrated London News’ for whom the artist worked for. The central view was of the S.S. Great Eastern but surrounding this was smaller titled vignettes including I.K. Brunel’s other ships the Great Britain and the Great Western. This original work sold for £3200. The most recent offering of “Bruneliana” appeared in August as part of the auction of Paper Collectables. A concertina style optical toy peepshow of the Thames Tunnel from the Wapping Entrance sold for £1100. Over the last two years a variety of photographs relating to Isambard Kingdom Brunel and his engineering triumphs have also featured in Toovey’s auctions and always attract considerable interest, more of these are already consigned for the Sale of Paper Collectables on 6th November. Some people might wonder why these items appear in Sussex when the Brunels are much more associated with Bristol and London. The days of internet advertising and Toovey’s direct marketing mean that successful sales of “Bruneliana” can be held in Sussex. These items have sold to private collectors, specialist dealers, institutions and investment corporations across the country.  As the Antiques Trade Gazette reported on the 24th March “The Sussex village of Washington has to a very large degree become the preferred point of sale for Brunel material in recent times.”  Those still wanting a tenuous link with the Brunel family and Sussex however, can find one in the schooling of Isambard Kingdom. Between 1816 and 1820 the young, future engineer attended Dr Morell’s Academy in Hove, where it is believed he nearly choked on a half sovereign. As a result of this local connection the Brighton & Hove 673 double-decker bus is named after the famed engineer – an arguably useless piece of trivia to finish with!

The last pint has now been pulled at The Montague Arms but for over forty years it garnered a reputation for idiosyncrasy, which attracted troops of fascinated and sometimes bewildered visitors from all over the world. Run by landlord Peter Hoyle from 1967 until its recent closure, it offered the traditional pub welcome and atmosphere of a bygone era, juxtaposed with unconventional live music, cabaret and themed events, in a somewhat surreal interior, crammed with curiosities. Voted number one by The Rough Pub Guide, A Celebration Of The Great British Boozer (Orion Books 2008) and hailed as “one of our strangest, and best, boozers” by The Sun newspaper, The Montague Arms was famed for its eccentric décor. An eclectic mixture of nautical items, curios, copper and brassware, ethnic memorabilia and taxidermy, the collection includes numerous ships’ fittings, large-scale models of ships, a vintage diving helmet and boots, a penny-farthing bicycle, tribal artefacts and a range of stuffed animals’ heads, including that of a zebra, which used to gaze out from one of two horse-drawn carriages permanently installed in the pub.  The collection will be offered for auction at Toovey’s Spring Gardens saleroom.

Please click on an image for full view, and again for further magnification

Many regular followers of Toovey’s auctions will remember the remarkable single-owner collection, the Brunel Hawes Archive, offered for sale in November 2010. All items were entered by a descendant of Sir Marc Isambard Brunel. Sir Marc was an eminent engineer, but arguably overshadowed by his son, Isambard Kingdom Brunel. The prices realised at the single-owner sale undoubtedly provided a market correction in values for items relating to the Brunel family at auction. With the accompanying national press attention after such a sale, some other Brunel-related material was entered by other vendors and successfully sold at Toovey’s Sussex auction house throughout 2011. This year looks set to be no different, with a very interesting children’s book already consigned and entered for the specialist Antiquarian and Collectors’ Book auction on 21st February. Titled The Great Eastern ABC, or, Big Ship Alphabet. Designed alike for the instruction of youth and the entertainment of all ages and conditions, the 16-page book (including the printed wrappers) is a surprising rarity, published just after the death by drowning of Captain Harrison on 21st January 1860. 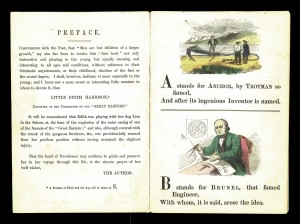 It has 26 hand-coloured wood-engraved vignettes, one for each alphabetic couplet, including a pasted-over slip below a portrait of Harrison standing on deck, stating ‘H stood for poor Harrison – How sad was his fate! / It now stands for Hall, appointed of late’, perhaps making this charming book an unrecorded variant or second issue of an already scarce title. The original version published in time to be noted in ‘The Athenaeum Journal’ of 28th January 1860 and ‘The Economist’ of 14 January 1860, stated ‘H is for Harrison her skilful commander, / None can excel him (without any slander)’. 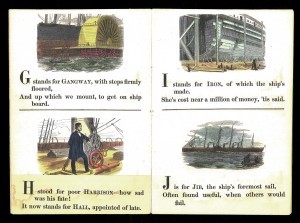 Every page in the book has delightful vignette illustrations but perhaps the most interesting from a collector’s point of view is a portrait of Isambard Kingdom Brunel above ‘B stands for Brunel that famed engineer, / With whom, it is said, arose the idea’. The children’s book is bound in the original printed thin card wrappers, the upper cover blocked with the title and integral vignette, the backstrip reinforced with 19th Century paper. The little book does have minor condition issues, including a little damp-staining, but for a paperback book of this age, intended for the use of children, it has survived in remarkably good condition. Perhaps this is the reason it is such a rarity, or perhaps it is because sales were poor as the boat’s subsequent ill-fated career proved to be a far from ideal example for young children. This is speculation, but Toovey’s have not been able to find another copy of the same title selling at auction in the last thirty years. This wonderful collector’s book will be offered at Toovey’s Washington salerooms with the potentially conservative pre-sale estimate of £1000-1500. (Please click on an image to make it larger, and again for further magnification)